The official crest of the club carries the word Instituted 1774, apparently a statement of fact but probably an early refusal to make a claim which could not be factually substantiated. 1774 is certainly a definite date as it was in that year that the silver cup was subscribed for and presented by gentlemen golfers of Musselburgh to the Golf Club, but a cup is not ‘presented’ to a club not already in existence. Unfortunately the minutes are not in the possession of the Club nor is it known where they might be; they seem to have disappeared very early on; certainly earlier than the Club Centenary Celebration. 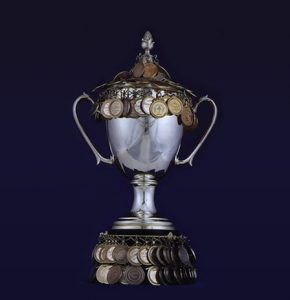 The Old Club Cup -the oldest trophy still competitively played for in the world.

There are however two sources which point to a date earlier than 1774 for the institution of the Club and one of these must be considered as being of great authority. It is a statement made in the 1845 Statistical Account of Scotland by the Rev. Leslie Moodie, DD., a successor of the Rev. Alexander Carlyle (nicknamed ‘Jupiter’) who became minister of the Parish of Inveresk in 1784, who kept diaries and notes of all his activities and wrote his autobiography; as he himself writes “Having observed how carelessly and consequently how falsely, history is written, I have long resolved to note down certain facts…” to keep him (the historian) within the bounds of truth and certainty. To this there is to be added the fact that the Rev. Alexander Carlyle was the Winner of The Silver Cup in 1775 and further that there exists a statement that he was one of the founder members of the Club. As the Rev. Leslie Moodie had full access to these records and based his Report upon the one written by ‘Jupiter’ in the 1795 Statistical Account then some authority must be given to this statement:- A golf club was formed in 1760 and still continues to flourish, consisting of the principal gentlemen of the town and vicinity. A handsome silver cup (‘Jupiter’ gives as the reason to preserve the taste for this ancient diversion) is annually played for, the winner of which retains possession of it and is Captain of the Club for one year and attaches a gold or silver to it before the next competition. Surely with ‘Jupiters’ passion for accuracy, his membership of the Club, perhaps from its inception – and his proximity both of time and place, there is some justification in accepting the date of 1760 as the inaugural year of the Club.

The same record is given in James Paterson’s Regality of Musselburgh, published in 1857, and indeed must be based upon the 1845 Statistical Account, but once again the author is a man with an intense desire for accuracy and meticulous checking of detail. It is not likely, therefore, that he would repeat such a categorical statement about the date of the Club’s foundation had it not been possible for him to check and counter-check his information.

So it is that there are three dates to be given in this very brief summary of R.M.G.C; 1760 as its probable foundation, on the authority of a date-conscious diarist and autobiographer and his followers; 1774 when the Silver Cup was won by Thos. MacMillan of Shorthope, the Club’s most honoured Trophy, still played for in the Autumn Meeting; and 1784, the year of the Club’s first Minute Book, which opens with the report that on December 10th at Mrs. Sherriff’s “The Company of Golfers met this day, according to adjournment, when they proceeded agreeably to 5th Rule, to a re-election of Members when the following were re-elected.” There were 26 members, of whom 13 were present, and some of these paid the fines imposed upon the others of their absence. Mr. Gillies was elected president, Mr. Ramsay as the Cup Winner was captain and Mr. Davidson was appointed secretary for the ensuing year.they also appointed Brook their officer; he was paid 1/6 per meeting (there were 9 monthly meetings, none being held in July, August or September) acting as postman and as collector of subscriptions, fees etc.

The society, Company or Club (all these terms are used in the early records) met in the local Inns and Taverns in the afternoon for Dinner, receded by the matches entered in the Club Match Book at the previous meeting, Usually foursomes arranged for 12 noon; these were played for “neither more nor less than 6d. per Hole… and no wager above Two shillings and Sixpence shall be laid upon any match that shall be entered in the Books….” The only Medal Competition (perhaps the earliest one played) was the one for the Silver Cup but despite its importance and its being carried on the day in a procession of clergymen, military men, doctors and lawyers with the town drummer, and the club officer carrying the Cup, competition was not particularly keen, sometimes only one or two, and on occasions no one, turning up to play for it. Every year a gift of golf balls was made for the scholars of the local school and in the Minutes of 12 Dec1788 there appears the word of the Club’s responsibility for the Links when it is recorded that “Baillie John Cochran was chosen Keeper and Surveyor of the Links”, probably a wise move to ensure Council action as well.

It was in January of that year that the Laws of the Society were revised and 9 Rules were adopted. Three years later “….the Golfing Club met when proposals for dissolving the Society were laid before them which were unanimously agreed to…. they elected themselves into a new Golfing Society;…” The captain was re-elected and in 1892 the new Rules of the Golfing Society of Musselburgh, remarkably similar to those of 1788, were subscribed by the members. It must have been a happy society to judge from the January 1793 Minutes:- “…. The meetings were so merry that it was agreed that matches and any other business should be delayed till next month….”

From 1797 to 1807 the Club was almost dormant but was kept alive by Colonel Stewart, winner of the Cup in 1797, who looked after its safety for ten years and was still deemed as Captain when Sir John Hope, Bart. of Craighall won the Cup in 1807. Somewhat similarly Sir Jas. G Baird, Bart. won the Cup in 1812, after which there was no competition for it for 15 years, the Club being inactive from 1812-27. Once again Sir John Hope, Bt. headed the revival, being named as Captain on 1st July, 1828 and as President in September. It had been in his Presidency in 1881 that the Club agreed “to present the subscription a handsome new creel and skull to the best Female Golfer who plays on the annual Occasion on the 1st January next old style (12th January new) to be intimidated to the Fifth Ladies by Mr. Robertson the Officer of the Club. Two of the best Barcelona silk handkerchiefs to be added to the above premium of the creels”.

This interest in the playing of the game becomes much more noticeable after the 1828 resurgence. Previously it could have been said that the Company of Golfers was rather a Dining Club which held monthly meetings. The Dinner, which was timed for about 3:30pm to 4:00pm, being proceeded by the playing of matches arranged at the previous meeting, apart from the one occasion of Medal Play for the Silver Cup. To Play on the Links on a Club Day and not to turn up for the Dinner involved a fine of 1s. (the cost of a meal was 8d.) and the betting on the matches played, frequently meant the appearance on the dining table of several bottles of claret. Dining, wining and fining formed the greater part of the Club Regulations and Laws.

You can find out more about which cookies we are using or switch them off in settings.

This website uses cookies so that we can provide you with the best user experience possible. Cookie information is stored in your browser and performs functions such as recognising you when you return to our website and helping our team to understand which sections of the website you find most interesting and useful.

You can adjust all of your cookie settings by navigating the tabs on the left hand side.

Strictly Necessary Cookie should be enabled at all times so that we can save your preferences for cookie settings.

If you disable this cookie, we will not be able to save your preferences. This means that every time you visit this website you will need to enable or disable cookies again.